What is beta-delayed neutron emission?

Beta-delayed neutron emission occurs in extremely neutron rich nuclei. Whenever the beta-decay populates excited states in the daughter nucleus above the neutron separation energy it becomes energetically feasible that at neutron is emitted. The concept of beta-delayed neutron emission is schematically illustrated in the figure below. The portion of emitted neutrons with respect to electrons (beta particles), gives an idea of the amount of beta-strength going to high excited states in the daughter nucleus, which is connected with the underlying nuclear structure of both parent and daughter nuclei. 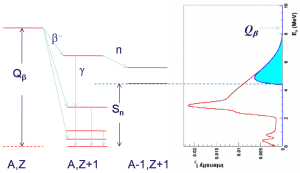 Most of the exotic nuclei involved in the rapid neutron capture mechanism are expected to be beta-delayed neutron emitters. However, only a small portion of them has been measured in laboratory experiments. Thus, r-process model calculations have to rely, mostly, on theoretically predicted neutron branching ratios, which are expected to have a rather large uncertainty, particularly far-off stability. Beta-delayed neutron emission influences the final r-process abundance pattern in two ways. On one hand, beta-delayed neutrons tend to shift the abundance distribution toward lower masses because in this kind of beta-decay the nuclear mass is not conserved; A nucleus with mass A, after decaying and emitting 1 neutron transforms into a nucleus with mass A-1. Multiple neutron emission has therefore a stronger effect on the final abundance distribution. On the other hand, this surplus of beta-delayed neutrons may produce a re-activation of the r-process nucleosynthesis in the latter stages of the process. In order to determine quantitatively the impact of these effects in the final r-process abundance distribution, clearly, more experimental data far-off stability is needed.

Our group has performed several experiments aiming at the measurement of r-process nuclei at Radioactive Ion Beam (RIB) facilicites like JYFL (Finland) [1] and GSI (Germany) [2]. Many of these measurements turn out to be relevant also for the design of advanced nuclear reactors (see section below). Recently, our group has initiated the BRIKEN project. BRIKEN stands for beta-delayed neutron emission measurements at the RIB facility of RIKEN. BRIKEN is a joint international effort, comprising more than 60 scientists from 24 different research institutions worldwide, thus joining expertise and instrumentation in order to build the world largest neutron counter array.

Beta-delayed neutrons for the safe control of reactor power

Nuclear reactors rely on the very small fraction of beta-delayed neutrons for safe power control operations. Beta delayed neutrons allow a nuclear reactor to respond several orders of magnitude more slowly than just prompt neutrons would alone. Without delayed neutrons, changes in reaction rates in nuclear reactors would occur at speeds that are too fast for humans to control. Less than one percent of the neutrons present in the reactor are emitted in the decay of fission fragments with their characteristic time dependence. They provide a “damping” mechanism on the effect of sudden changes of the prompt fission neutron fraction, avoiding power excursions. In industrial applications the amount of delayed neutrons and their time evolution is parameterized according the popular six-group Keepin formula for the relevant fissionable isotopes (235U, 239Pu, …) [3]. The parameters of this empirical formula are adjusted on integral type experiments. A microscopic approach based on summation calculations (usingindividual fission fragment yieldsY, delayed neutron emission probabilities Pn and half-lives T1/2)while very appealing has not met yet the required accuracy. Such calculations will allow a deeper understanding of the time evolution of the delayed neutron fraction; can be used to simulate reactor burn-up scenarios, which cannot be easily tested experimentally; and will supply missing information for unconventional fuel compositions (with high content of minor actinides) such as those which will be encountered in radioactive waste transmutation scenarios (Gen-IV and ADS) [4].

The problem with the microscopic approach is the lack of accurate information on the relevant nuclear data. The largest uncertainties are found in the available fission yields, which are generally speaking difficult to measure. Pn data are believed to be on much better foot. However, a detailed investigation reveals that the data for several important contributors do not reach the necessary accuracy or their evaluated uncertainty is questionable.

Our group has initiated a research program to determine neutron emission probabilities with improved accuracy for important nuclei in reactor technology [1]. This activity is closely related to similar activities that we carry out with the focus on basic research: nuclear structure and nuclear astrophysics. This has lead us to contribute significantly to the design of a new neutron counter (BELEN) and to develop an ad-hoc novel data acquisition system (gasificTL). Current measurements are being carried out at the IGISOL mass separator of the University of Jyvaskyla Cyclotron Laboratory (JYFL). Another feature of the improved accuracy measurement of Pn values, to be exploited, is the constraint imposed on the associated fission yields leading to improved Y values.

The renewed interest on this fieldat international level has been recognized by the IAEA, which has launched a Coordinated Research Project (CRP) on Beta Delayed Neutron Data (https://www-nds.iaea.org/beta-delayed-neutron/) with our participation.